The new extended play 12” from Psychic TV/PTV3 “Alien Brain Vs. Maggot Brain” will be issued by Vanity Case Records UK on September 23rd 2010 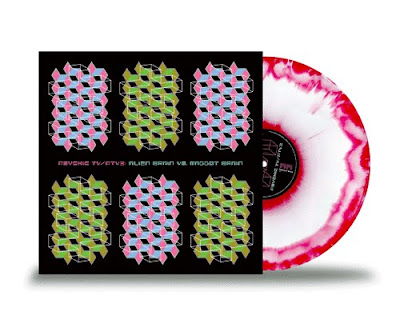 The new extended play 12” from Psychic TV/PTV3 “Alien Brain Vs. Maggot Brain” will be issued on pink and white brain splatter vinyl by Vanity Case Records UK on September 23rd 2010. The release will be a numbered, limited edition of 500. Recorded directly after their ‘final’ 2009 European tour, the double A-sided 12” single features two long, powerful and psychedelic pieces, culminating in a wild and intense interpretation of Maggot Brain. Genesis Breyer P-Orridge’s lyrics and vocal performance combined with the bands stratospheric rocking make for a mind-blowing experience which is highly recommended. Keep checking this site for pre order info or
http://www.vanitycaserecords.com/
Posted by jacurutu3 at 11:26 AM No comments:

Email ThisBlogThis!Share to TwitterShare to FacebookShare to Pinterest
Labels: Psychic T.V. add only U.S. show of 2010

All Tomorrow's Parties curators Godspeed You! Black Emperor have announced the final acts for this year's Nightmare Before Christmas event.


The final five additions to the bill are Throbbing Gristle who will headline one of the nights of ATP. The controversial avant-garde Brit group fronted by Genesis P-Orridge will perform an all new set using new experimental electronic equipment, spiced with a couple of old favourite tracks and no doubt some thought provoking imagery to boot.

Completing the new additions heading to Butlins are the melancholy Tindersticks, The Sadies, Yomul Yuk, and Dreamcatcher

tickets online here
http://www.efestivals.co.uk/festivals/alltomorrowsparties/2010wk3/
Posted by jacurutu3 at 11:35 AM No comments: 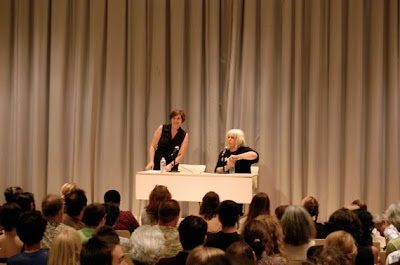 At the New Museum last night, senior curator Laura Hoptman introduced Genesis Breyer P-Orridge to a crowd in the museum’s theater by listing P-Orridge’s myriad accomplishments. She was a founder of British performance-art group COUM Transmissions, which evolved into the legendary industrial band Throbbing Gristle, Hoptman explained, and she has served as an unrelenting provocateur for almost four decades. But P-Orridge, sporting a black shirt emblazoned with the word “Womanizer” in white block letters, was having none of it. “I didn’t do anything!” she protested to Hoptman. “Nothing!”

This was more than false modesty. As P-Orridge’s career has progressed, she has increasingly refused to distinguish between her art and her life, undergoing surgical operations with her second wife, Lady Jaye Breyer, in pursuit of what the two termed pandrogyny, a genderless state. Breyer died in 2007, but P-Orridge has forged on. In order to match Breyer’s appearance, P-Orridge has undergone additional operations and had cosmetic tattoos added to her face to match Breyer’s eyebrows and beauty marks. She has announced that she and Breyer have become a single physical being. (P-Orridge refers to herself in the plural. For clarity, I am using singular feminine pronouns, as Hoptman did.)

But back to the occasion of the chat: Hoptman’s latest New Museum show, “Brion Gysin: Dream Machine,” has just opened, and P-Orridge happens to have been an old friend and admirer of Gysin. The crowd had gathered to hear P-Orridge talk about her late friend and, as the invitation promised, discuss “other matters.” She did not disappoint, providing a freewheeling series of anecdotes about Gysin, her life, and the art scene that once surrounded their mutual friend Williams S. Burroughs in downtown New York.

Here are some of the highlights from the talk:

•P-Orridge attended a military school, she revealed, listing off to the audience a variety of the weaponry that was usually on hand: mortars, rifles, machine guns, artillery, and so forth. P-Orridge explained that she was trained as a first-class sniper while in school. “They taught me to kill at one mile!” she said, a glimmer in her eye. “Also, we began to start smoking hash at that time.”

•Many rare Gysin films exist today only because of P-Orridge. Burroughs apparently phoned P-Orridge frantically one day, telling him to call Gysin, who explained that a numbers of films kept in storage were going to be thrown in the garbage since the person paying the rent had died. P-Orridge explained that she cashed her welfare check, hopped in a taxi, and picked up the large, 35 mm reels just as workmen were carrying them to a Dumpster.

•“I realized that real lives were a lot more interesting than aesthetics,” P-Orridge said, describing what she learned early in her career by falling into the world of Burroughs and Gysin. Asked by Hoptman to describe pandrogyny, the state that P-Orridge is working to attain, the artist succinctly outlined her beliefs. Humans have transformed their world, she noted, but they have not changed themselves. They must rethink who they are as physical and spiritual things since they are currently out of touch with the world they have created, which has led to the tremendous destruction and violence that occurs today. (I’m describing this with considerably less eloquence than P-Orridge offered.) “We have to destroy all binary systems,” she said.

•Also, we have to colonize space. This would be easier if we could hibernate, like bears, P-Orridge noted. If we were cold-blooded, she continued, we wouldn’t even have to heat spaceships carrying space explorers. And, since there would be no gravity, we could even get rid of our legs. “Once you let go of the human body as a sacred thing, anything is possible,” she said.

•Describing a visit to Hoptman’s Gysin exhibition upstairs, P-Orridge mentioned standing in front of one of the artist’s works, which was blue work and features a psychic cross. “He was going to give that to me, but we couldn’t take it because it was too precious,” she told Hoptman. “We regret that.”
Posted by jacurutu3 at 11:52 PM 1 comment:

Email ThisBlogThis!Share to TwitterShare to FacebookShare to Pinterest
Labels: 1984, Decoder

Gen's relationship with Timothy Wyllie, author of Love Sex Fear Death: The Inside Story of The Process Church of the Final Judgment.

The following excerpt appears as a full article written by Gen in Love Sex Fear Death: The Inside Story of The Process Church of the Final Judgment by Timothy Wyllie, edited by Adam Parfrey, published by Feral House.

Through a mutual friend, Eve, I was introduced to Timothy Wyllie. Eve knew of my "fascination" with The Process and my search for the realities behind it, rather than accepting the tiny, vague amount of gratuitous misinformation available, when she introduced us. Timothy was everything I'd hoped he might be and more, and his sharp dry intelligence and wit combined with his encyclopedic knowledge and application of spiritual matters blew me away in the same inspirational cosmosis of energy that Brion Gysin and William S. Burroughs had. Timothy was living in New York at that time and was directing his beneficent resources toward dolphin sentience, extraterrestrials and angels. Brighton had a Dolphinarium where two dolphins suffered terribly, both psychologically and physically, from cruel conditions. TOPY decided to try and close the Dolphinarium by boycotting the entrance every single weekend and peacefully asking people not to go inside and thus financially collude in the ongoing torture of these supra-intelligent beings. For over a year TOPY picketed the Dolphinarium, eventually enlisting the support of animal rights groups. Psychic TV, Julian Cope, Captain Sensible of The Damned and other caring friends participated in benefits. TOPY Individuals visited local schools getting the children involved in dolphin art projects and study groups. We even released a CD called Kondole (the Aboriginal name for a whale spirit) to finance the campaign. Eventually we succeeded and through a charity of the Aga Khan, our two dolphins were flown to the Turks and Caicos for rehabilitation. Timothy Wyllie had inspired us and as a marvelous side effect he has become a lifelong friend and mentor.

Timothy became my oracular fallback position. He had already been through all this and more, so in times of
isolation, desolation and doubt I would call him for advice. We could both see a pattern that intimated trouble ahead in my public and private life. So I called upon the TOPY network to donate good quality children's and baby clothes, packed them up in large numbers and flew my family to Nepal. We linked up with Samye Ling's monastery there and financed, out of my savings, a twice-daily clean water and meal kitchen at Boudenath Stupa in Kathmandu. Some days we fed 300 to 400 Tibetan refugees, lepers and beggars. In between we took teachings and meditated. The clothes were distributed to refugee families in need to help them survive the winter. 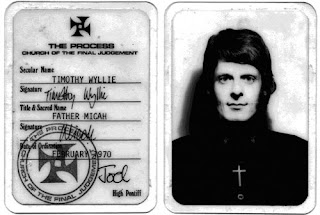 Love Sex Fear Death: Inside The Process Church of the Final Judgment with Timothy Wyllie from DANGEROUS MINDS on Vimeo.