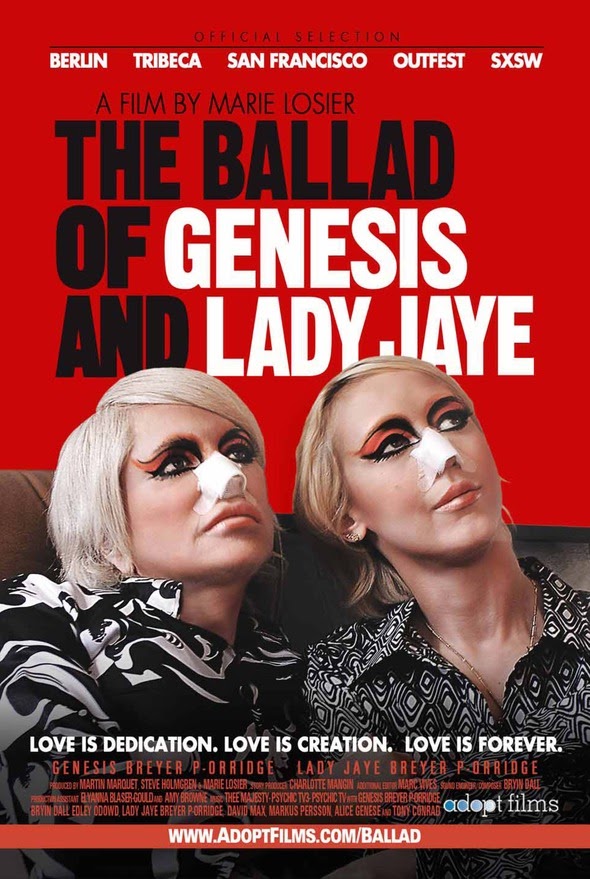 Marie Losier - The Ballad of Genesis and Lady Jaye-USA RELEASE March 8th-NYC-ADOPT FILMS
Posted by jacurutu3 at 6:03 PM No comments:

Email ThisBlogThis!Share to TwitterShare to FacebookShare to Pinterest
Labels: Adopt Films, THE BALLAD OF LADY JAYE AND GENESIS film

WFMU, One of our favorite radio stations will be starting their annual fun drive next week. For those of you who are unaware, WFMU is a free form, listener sponsored radio station which has been very supportive of GBP-O related projects over the years. On Brian Turner's stellar and intriguing show from 3-6pm on Tuesday, February 28th, the grand prize will be Genesis' very own tank top bearing the message "Stop Looking At My Tits". Often worn and often photographed, anyone who pledges $100 or more will be in the running to win this item IF they make specific mention that they want it. The hotline is 201 209 9368. For more info about the station and the fund drive, visit:
http://www.wfmu.org/
Posted by jacurutu3 at 3:15 AM No comments:

INVISIBLE-EXPORTS is pleased to present I’m Mortality, the second solo exhibition at the gallery of new works by BREYER P-ORRIDGE. 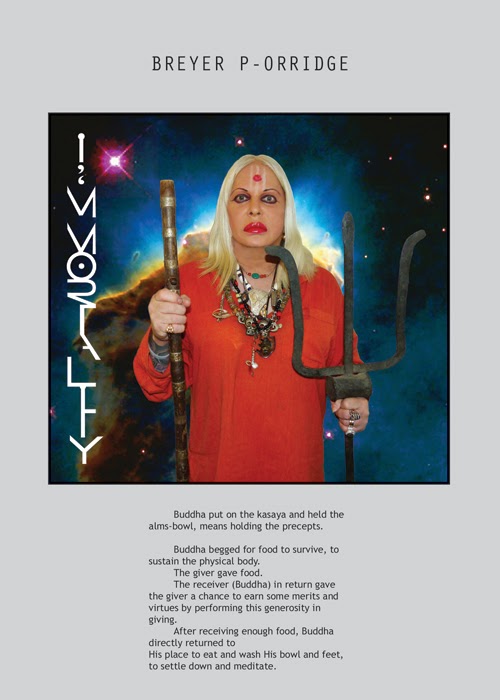 Genesis BREYER P-ORRIDGE is one of the most rigorous and relentless agents of the postwar Anglo-American vanguard, interrogating the meaning and substance of identity in a peerless half-century program of willful reincarnation and shape-shifting. Embracing the body as not simply the vessel but the site of the avant-garde impulse, BREYER P-ORRIDGE has reinvented and reintroduced herself again and again—as Fluxus pioneer, groundbreaking performance artist, inventor of industrial music, "wrecker of civilization," and, most recently, as pandrogyne, in a romantic project of identity and gender merging with her now-late wife, Lady Jaye. In her new body of work, conceived to be a kind of “inter-dimensional” collaboration between the material and the immaterial world, BREYER P-ORRIDGE probes the limits of each of those enterprises, drawing on the consonant and indigenous traditions of shape-shifting and reincarnation encountered during recent trips to Nepal: a practice born at an intersection of Mortality and Immortality as experienced as biology and as consciousness.

"We view Breyer P-Orridge as a separate person who is both of us, Neither of us take credit for the work, the work is a melding of both of our ideas which we would not have had singly. Both of us are in all of our art. That third being, Breyer P-Orridge, is always present." —LADY JAYE, 2003
Posted by jacurutu3 at 12:50 AM No comments:

From Edely of PTV on the fothcoming "THANK YOU" redux

In time for our upcoming Australian debut, PTV3 presents mini version of our entirely original new song about our Beloved Lady Jaye called "THANK YOU". Edited to now fit on a 7" record, this intensely moving and psychedelic track is split on to 2 sides as "Thank You (Parts I & II)". Utilizing recycled colored vinyl, each slab is completely unique and comes housed in a recycled craft paper jacket emblazoned with a removable embroidered patch attached to the front cover. Includes an 8 page booklet featuring handwritten Breyer P-Orridge lyrics (stamped on page 5 with the BP-O seal of authenticity) as well as 2 postcards designed exclusively for this release (one design: one for mailing and one for keeping). Each package was lovingly and assembled by hand. This release, limited to 230 copies only (hand numbered on the back), is the second in a new series of Angry Love Productions "Handmade" vinyl records. Please note that the image shows variation of vinyl color and your purchase will contain ONE slab of vinyl. Available at our forthcoming Los Angeles and Australian gigs as well as on the webshoppe!

Email ThisBlogThis!Share to TwitterShare to FacebookShare to Pinterest
Labels: "THANK YOU".

RadioValenciaSF Podcast up now for  interview with Genesis and "Ballad of Genesis and Lady Jaye" director Marie Losier: