I think it’s a good sign that art people can be made uncomfortable in the way Genesis Breyer P-Orridge makes them uncomfortable. S/he doesn’t fit into any category, which is exactly what s/he intends, making the process of h/er recent re-evaluation in art historical context particularly important to analyze. H/er retrospective “S/HE IS HER/E” mounted by the Andy Warhol Museum in Pittsburgh brings together 100 works from the mid 1970s to today; you look back through h/er current “pandrogyny” work, following the evolution of formal strategies (performance, the cut-up) and the expansion of a coherent symbolic vocabulary.

While Genesis is a cult icon in the music world, best know as the animating force behind the bands Throbbing Gristle and Psychic TV, h/er pioneering performances are rarely considered in the lineage of performance art, just as h/er visual art remains largely unexamined. One reason for this is that P-Orridge has done a lot of work to construct h/er own theoretical/philosophical context that is antithetical to the commercial art world and its discourses. H/er voluminous writings have recently been made available in the “Psychick Bible” where s/he discusses different ritual actions one can do to de-naturalize the structures of social and political power that invisibly govern our minds and bodies.

Courtesy of the artist and INVISIBLE-EXPORTS

One of these ritual acts of image-making is the “sigil”—a process of symbolic spell making with the intention of “making something happen.” That Breyer P-Orridge insists that its art’s job is to “make things happen” in the world, as a vital part of life, shows how far she is from the academic-careerism that dominates current discourse. A collection of sigils from the 80′s are shown, including one made at the request of h/er friend Derek Jarman who needed strength to finish a film as he was dying of AIDS.

Like any alchemist Breyer P-Orridge wants to regain the “order of intimacy” as Bataille put in in his “Theory of Religion” a state where all categorical divisions have been broken down. Kissing and sex rituals are then figured as a symbolic representations of this merger. In the kinetic sculpture “Tongue Kiss” two wolf heads with knife tongues face each other, one suspended upside-down circling the other. The knife tips pass a hair’s width apart—every so often hitting, making a little ringing sound. It is a beautiful little meditation on the structure of desire. The idea of the cut-up, taken from the artist’s friends Brion Gysin and William Burroughs, comes to its fullest incarnation in the Pandrogyne work where P-Orridge and h/er lover Lady Jaye Breyer “cut-up” their bodies to create a third being.

The most beautiful section of the exhibition is a gallery of Polaroids by Breyer P-Orridge and selection of previously unseen Warhol polaroids. In some ways glamour and outrageous social performance make Genesis-Warhol seem like an easy fit, although they are in fact completely opposites in intention and execution. Unlike Warhol, with his shell game of surrogates, it is actually always P-Orridge’s own body on the line, a body that believes in sex, violence, and spirituality and eschews all the vacant materialism of the Warhol-automaton. Genesis, with the greatest humor, addresses this conflict in the collage “Like Father, Like Son?” All children have to rebel against their parents.

The day before the opening Genesis gave a walk through just for the staff of the museum—almost all of them came, it was a mob. As we were leaving the opening through the back, one of the security guards stopped h/er and said “I want to tell you that what you said about your art was one of the best things I’ve ever heard. We’ve all been talking about it. I think this is the best thing I’ve ever seen at this museum.”

Email ThisBlogThis!Share to TwitterShare to FacebookShare to Pinterest
Labels: GENESIS BREYER P-ORRIDGE “S/HE IS HER/E” exhibit at the Andy Warhol Museum, Pittsburgh Pa 2013 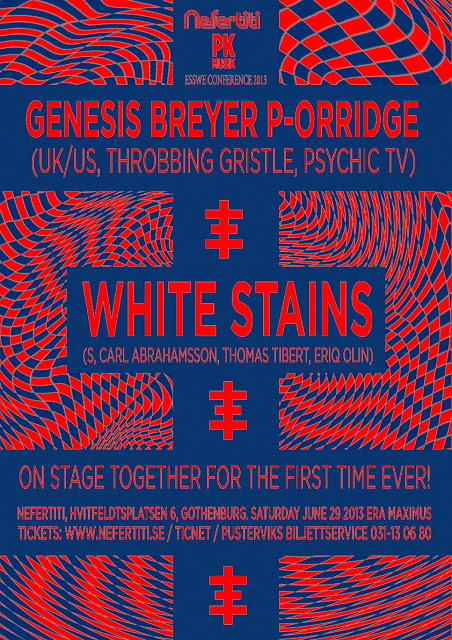 With "At Stockholm" being one of my favorite Genesis projects ever ,this is quite exciting news!

Psychick gig bliss up a head!


It's never too late or too soon to look back and enjoy the past. Especially when it deals with future, as it does now. On June 29th, White Stains will resurface after a 20 year hiatus/hibernation. This in order to celebrate two specific projects: White Stains' 1990 album At Stockholm and Cotton Ferox' album Wordship (2004). Is there a common denominator? Of course. We made these albums together with Genesis Breyer P-Orridge – a living legend if there ever was one.

As we enter the stage at Nefertiti in Gothenburg on the 29th, Genesis will be with us. Not to make specific renditions or versions from our two albums, but rather to encourage and celebrate the atmosphere they contain. Very likely, we will surf on this wave of recurrence/resurgence to make a third album too. It would be stupid not to.

Late 1989, I organised a small spoken word tour for Genesis in Scandinavia. We had also already planned to record some of Gen's readings in a studio setting. As White Stains had just integrated sonic wizard Thomas Tibert, who had his own studio, everything moved on pleasant automatic. Gen read his poems perfectly – most of them were recorded on first takes – and when we later made the music for the poems it was like hand in glove on all levels. With textual material like that and a reading that smooth and professional, it's very hard not to make history.

Other adventures then intervened, as they usually do. But in 2002, it felt like it was high time again. As Genesis was coming over to do a lecture on his work at experimental music centre Fylkingen in Stockholm, Tibert and I prepared new music (then as Cotton Ferox) and it was bliss all over again. The result was released in 2004 in the form ofWordship. Some of these vocal recordings had also been used on Cotton Ferox' debut album First Time Hurts in 2002.

Someone as versatile as Genesis must surely have a hard time with projections from others. Is Genesis an (oc)cultural engineer, an industrial music pioneer, a collage artist, a philosopher, a magician etc? Well, of course, all of these and then some. But there is one all-permeating quintessence that is unmistakeable. Genesis is a poet. This is what fascinated me in the beginning of our friendship, and it still does. That's why it'll be an honour to share the stage with Gen and celebrate his/her poetry and the bizarre music that Tibert and I have concocted over the years. They go well together.

The performance will be neither "industrial" nor "electronica" nor "spoken word" but rather all of it in a colourful and quaquaversal mix created to make emotional jump cuts and possible existential mutations. It will be a grand old time spanning from ancient history to the distant future. I hope you'll be there together with us at Nefertiti in Gothenburg on June 29th, 2013, on this exciting adventure.

MORE INFO AND TICKET SALES HERE. BE SMART AND GET YOUR TICKET NOW.

PS. You can buy all of the above albums at the iTunes Music Store. By buying the albums instead of illegally downloading them, you help us in the process of making and releasing new music. Thank you.

I should also mention that the concert is the public final event of a four day conference/symposium at the University of Gothenburg dealing with esotericism, occultism, alternative health movements and many other interesting things. Please consider taking part in this too!

"In the beginning there were White Stains." (Genesis 23:1)