Genesis P-Orridge: 'People's lives should be as interesting as their art'

The Throbbing Gristle founder, once branded a 'wrecker of civilisation', talks about being given a poetry prize by Philip Larkin and reaching marital unity through plastic surgery
BETA 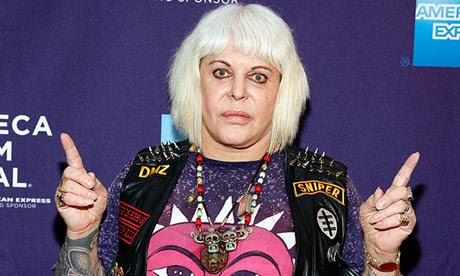 (1) The book Genesis Breyer P-Orridge is published by First Third Books in deluxe and standard editions.
(2) Genesis usually refers to h/erself in the second person as "we".
(3) 1985 Psychic TV single, a tribute to dead Rolling Stone Brian Jones.
(4)Former nurse Jacqueline Breyer, also known as Miss Domination. After marriage Genesis adopted the name Genesis Breyer P-Orridge.
(5) In 2007, from a heart attack related to stomach cancer.
Posted by jacurutu3 at 3:02 PM No comments:

Email ThisBlogThis!Share to TwitterShare to FacebookShare to Pinterest
Labels: 2013

The cover for the forthcoming COUM Transmissions "Aged Home & The 18 Month Hope" LP. Out on Dais Records this October. 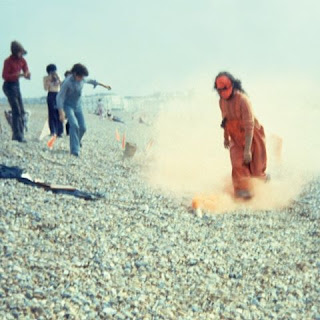 ALSO...
COUM Transmissions' "THE BRITISH GOVERNMENT" (1975) has officially been inducted into the permanent collection of the TATE BRITAIN!
INVISIBLE-EXPORTS is proud to announce the inclusion of COUM Transmissions' "THE BRITISH GOVERNMENT" (1975) into the collection of the TATE BRITAIN.
Posted by jacurutu3 at 12:28 PM No comments:

Genesis Breyer P-Orridge “Two into One We Go” Mixed Media, 2003. Courtesy of the artist and Invisible Exports, NY.

Two days ago Genesis Breyer P-Orridge gave an artist talk to accompany he/r ongoing retrospective at the Andy Warhol museum in Pittsburgh. After the talk a hoard of people lined up, cell phones out to get pictures with Genesis. Suddenly s/he felt a presence behind he/r and turned to look. Standing in the center of the stage was a dignified little girl, waiting. Genesis said “hello” and the child walked over and extended her hand—unfurled it with a kind of strange elegance—and said: “My name is Madison. I’m nine years old. I’ve loved your work all my life and I wanted to meet you.” Genesis thanked her, shook her hand, and asked where her parents were. Madison walked h/er across the stage to meet her father who said “she’s been nagging me about coming to this talk since January.” “Have you seen the exhibition?” Genesis asked. “Twice, and I’m going back,” said Madison. Genesis asked if she could give her a kiss on the top of her head and then did.

Madison and Genesis at the Andy Wahol Museum. Photo by Vanessa Sinclair

Who is this angel child, precocious enough to love Genesis Breyer P-Orridge at nine years old? We are keeping our eyes out for her in years to come!

I liked this story because it speaks to how grossly underestimated the intelligence of children is in our culture. Given that they have a vast and complex capacity to understand, why is it that most of the “entertainment” created for children today is banal and insipid? The fact is there are social and economic forces with a vested interest in dampening children’s sense of the possible: the first violent step in a larger societal project to create docile consumers and apathetic political subjects.

One disturbing example: an artist told me she was turned away from Paul McCarthy’s White Snow at the Armory with her two-week-old baby because “no one under seventeen could be admitted.” “But he is two-weeks-old—he can’t really “see” physiologically; furthermore, I’m his mother and I say he can go in.” The Park Avenue Armory staff told her under no circumstances could she enter with her child.

Marie-Louis von Franz, the Jungian expert on fairytales, said that one of the dangers of the “Disneyfication” of fairytales for children is that they flatten out the multifaceted nature of archetypes so that characters become the embodiment of pure good or total evil. It is clear that by reinhabiting Snow White Paul McCarthy is complicating a beloved childhood visual vocabulary, born at the intersection of American Puritanism and consumerism. I think White Snow is both a love letter to the aesthetics of classic Disney films and a statement on the profound role these images and stories have in shaping our future psychic lives.

Champions of censorship in all forms usually cry “think of the children!” And let’s, because if we actually think about children and their intelligences do we would change what they get to see and how they are treated in exactly the opposite ways culture warriors demand.

Email ThisBlogThis!Share to TwitterShare to FacebookShare to Pinterest
Labels: GENESIS BREYER P-ORRIDGE “S/HE IS HER/E” exhibit at the Andy Warhol Museum

Really excited to announce that our good friends over at Primary Information are releasing a limited edition reissue of famed mail art book G.P.O vs. G-P.O. from 1976 (originally published by John Armleder's Ecart imprint) which documents Genesis P-orridge’s collection of materials surrounding Great Britain’s General Post Office’s case against him for disseminating pornographic material through the mail in 1975. Only $16!

Had a great time working with James and Miriam on this project, glad it is finally seeing the light of day once again!

Email ThisBlogThis!Share to TwitterShare to FacebookShare to Pinterest
Labels: G.P.O vs. G-P.O 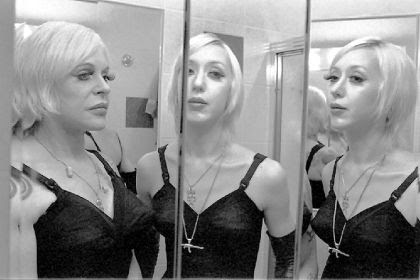 But the artist's most challenging and groundbreaking endeavor is the Pandrogyne Project, which, in its most elemental sense, co-joined two individuals through the physical and behavioral self-transformation of each.
The ongoing project is the creation of Genesis Breyer P-Orridge and h/er late wife,  (1969-2007). (Pronouns used in this review are those preferred by the artist.) It is also the framework for an exceptional exhibition at , "Genesis Breyer P-Orridge: S/HE Is HER/E."

Born Neil Megson in  in 1950, the artist looks like a proper, if impish, British school boy in a photograph incorporated into "Demon Child," one of a number of  pieces that show a connection to  working methods. S/he attended a conservative boys  and was raised  but managed to pursue  and interests as a teen.

In 1969, Genesis P-Orridge founded art collective , which carried out guerrilla street performances and later moved into art venues as performance art became an established medium of expression. Their rawness prompted a British parliamentarian to declare the collective "wreckers of civilization," and the group retreated from public to private space so as to not have its expression intimidated.

The sting remains as evidenced in such exhibition works as the 2009 "English Breakfast," which presents the Queen Mother literally with egg on her face in a  work that recalls the paintings of  artist . "The ," comprising photographs, the  and taxidermied mice, is  with menace.

The collective was about testing limits, said Nicholas Chambers,  and exhibition curator. "Limits of what the human body could endure and limits of what was acceptable in social behavior. Do we get to the edge here? Here? It's about pushing the envelope."

That's a characteristic of the Pandrogyne Project also, but to surprisingly futuristic goals.
This is Genesis Breyer P-Orridge's first museum exhibition, comprising more than 100 works selected from a four-decade career. The art reflects a searching intelligence, from early "Sigils" -- collages infused with archetypal symbols meant as guides to focusing energy in the manner of mandalas -- to the three vials of "Alchymical Wedding" that hold both artists' body residue, such as hair and nails. The central vial, harboring a mix, could provide the means to clone their Pandrogyne self, Genesis Breyer P-Orridge pointed out.

Mr. Chambers wisely chose to use the Pandrogyne Project as the show's framework, giving manageable form to an extensive oeuvre while focusing on the most contemporary expression. He found antecedent to the project's more pronounced recent exploration, and , of the body as early as the 1970s in photographs of a handsome Genesis P-Orridge as . The word pandrogyne appears in one of the artist's notebooks from the 1980s, Mr. Chambers said, but the concept was not articulated formally until 2003 in an essay, "Breaking Sex."
Despite that title, Pandrogyne is not so much concerned with notions of sexuality or gender but rather of oneness.
"The source of tension, the root of most human problems, is our binary world -- the either or, you or me, black or white,  or ," Genesis Breyer P-Orridge said when in  for the exhibition opening.

The Pandrogyne concept is "never either/or but both/and. It's not exclusive. It's extraordinarily inclusive," Mr. Chambers explained.

It's also quite romantic, in the uber-love shared by the Breyer P-Orridges that drove the desire to eliminate distinctions and become one. In their encompassing devotion to and idealization of love, they follow in the tradition of the great British . The transcendent component of the joining suggests .
"I always thought art was a spiritual journey," Genesis Breyer P-Orridge said.

Beyond that fusion are other possibilities that may be achieved once humankind frees itself from the presumed confines of its . "Once you let go of the notion that the body has to look a certain way," doors are opened to a new "evolutionary trajectory," Genesis Breyer P-Orridge said.

While Genesis Breyer P-Orridge acknowledged occasional loneliness, s/he still feels connected to  and said they continue to work together. Their experience of  led them to "the conclusion that there is ," the artist said. "She is in another dimension. We do feel her presence," s/he said using the plural that has become second-nature.

The unconventional nature of the Pandrogyne Project, and of its artworks including the central sentient one, is admittedly a challenge that the viewer has to make peace with. But as with other contemporary artists who work in extreme modes, the earnest intent is dialogue, not sensationalism. Consider Orlan (implications of  through ) and  (exploration of body-Internet compatibility), both of whom Genesis Breyer P-Orridge knows.
It's a discussion for which s/he has done the difficult groundwork. The opportunity to listen and to consider is ours.

Genesis Breyer P-Orridge will perform with the group /PTV 3 at 8 p.m. Aug. 16 at the New Hazlett Theater, North Side ($25; $20 students and members). S/he will give a talk at 2 p.m. Aug. 17 at The Warhol (free with museum admission).
The exhibition continues through Sept. 15 at 117 Sandusky St., North Side. Hours are 10 a.m. to 5 p.m. Tuesday through Sunday and until 10 p.m. Friday. Admission is $20; students and others ages 3-18, $10; 5-10 p.m. Friday, half-price. Also continuing through Sept. 15 are "Caldwell Linker: All Through the Night" and "Nick Bubash: The  of White Guys That Went Tribal and Other Works."
Related Voices Gallery Talks are "Queer and Brown in Steeltown with Raquel Rodrigez and Ayanah Moor," 2 p.m. Aug. 24, and "Troubling the Line: An Excerpt -- Poetry Reading and Conversation With Jenny Johnson and Ari Banias," 2 p.m. Aug. 31 (free with museum admission).
For information or Psychic TV tickets, call 412-237-8300 or visit www.warhol.org.
Post-Gazette art critic Mary Thomas: mthomas@post-gazette.com or 412-263-1925.First Published August 7, 2013 12:00 am
Read more: http://www.post-gazette.com/stories/ae/art-architecture/artists-test-boundaries-of-identity-in-warhol-museum-exhibition-698384/#ixzz2bNnz8XK2
Posted by jacurutu3 at 3:15 AM No comments: