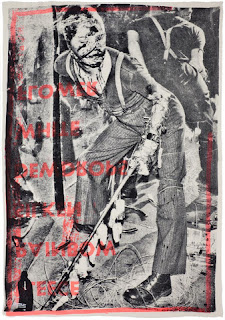 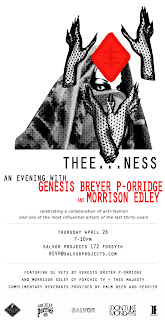 I Dont Like Mondays, Salvor Projects and Invisible Exports are pleased to present THEE...NESS. This collaborative event is to celebrate the launch of a limited edition scarf designed by Salvor and featuring artist Genesis Breyer P-Orridge. The event will take place on April 26th from 7 to 10 pm at the Salvor Projects NYC store at 172 Forsyth in the Lower East Side.  Guests will enjoy complimentary refreshments from Palm Beer and Perrier, as well as view Breyer P-Orridge’s artwork, on loan from Invisible Exports Gallery. P-Orridge and her Psychic TV band mate Morrison Edley will be performing rare DJ sets for the occasion and special edition gifts will be given to party goers.

GENESIS P-ORRIDGE: Genesis Breyer P-Orridge is an English singer-songwriter, musician, writer and performance artist. In the latter capacity P-Orridge was the founder of the COUM Transmissions artistic collective, which operated from 1969 through to the 1975. As a musician, P-Orridge fronted the pioneering industrial band Throbbing Gristle from 1975 through to 1980, and then the acid house band Psychic TV from 1981 through to 1999.

Here’s the trailer for the documentary recently released on Genesis and Lady Jaye, currently playing at Clearview Cinemas in Chelsea: http://www.youtube.com/watch?v=2e-gnyl1n8A

SALVOR:  Ross Menuez has operated the brand Salvor for the past 10 years here in New York City. Ross's brand Salvor continues to be a staple at Barney's New York, as well as cutting edge boutiques here in NYC like Project No 8. He is constantly being worn by public figures like Patti Smith, Michael Stipe, and Bjork. He has collaborated on special lines with numerous designers, most recently on a selection of custom printed denim with Rogan. Ross opened his first store about a year ago and began presenting an increasingly diverse range of products, creating a sizable men’s and women's line, unique footwear produced in Japan, a wide array of architecturally constructed bags and other accessories, in addition to his signature oversize graphic print scarves. He is a true artist and visionary thinker, using clothing and accessories as a vehicle for sophisticated experiments in style, the use of materials, and provocative content. You can familiarize yourself with some of his work via
http://shop.salvorprojects.com/

Please feel free to post in your events listings. Feel free to contact me if you require further information.

The Ballad of Genesis and Lady Jaye L A Premiere photos

at this link:
AP photos from LA Premiere
Posted by jacurutu3 at 12:10 PM No comments:

Email ThisBlogThis!Share to TwitterShare to FacebookShare to Pinterest
Labels: THE BALLAD OF LADY JAYE AND GENESIS film

This article is now online and should be in the print edition of L.A times ethier Friday or Saturday.


'Ballad of Genesis': Two artists sculpting their bodies into one 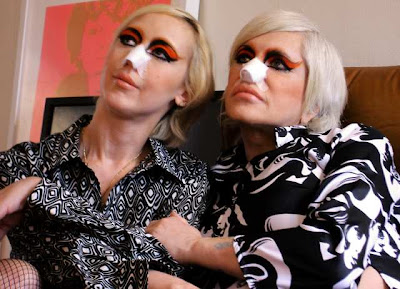 The first time Genesis P-Orridge met his future wife, Lady Jaye Breyer, she put him in her clothes, makeup and a wig to make him look like herself. It was 1993, and the first step toward a personal project of physical transformation they would eventually call “pandrogyne.”
“She told me she saw me as a mirror image of her, and that we were meant to be two halves of one,” remembered P-Orridge, an artist and musician best known for his work in the industrial bands Throbbing Gristle and Psychic TV.
That idea became truer than anyone could have imagined, as documented in “The Ballad of Genesis and Lady Jaye,” opening Friday at the Nuart for a one-week engagement. A decade into their marriage, the couple began a process of becoming one another through dress and cosmetic surgery, starting with matching breast implants on Valentine’s Day 2003.
The plan wasn’t for either of them to undergo a sex change in the usual sense. Nothing would be removed from their bodies, Breyer insisted then, only added.
“The body is not sacred. It is, as Lady Jaye used to say, ‘a cheap suitcase.’ And it carries around the real you, which is your consciousness, your mind, your thoughts, your aspirations and dreams,’” said P-Orridge, 62, speaking by phone from New York. “Surely, the container should be as wonderful and amazing and imaginative as you can make it.”
Their shared mission to become like two parts of a single “pandrogynous” being was an art project and an unprecedented love letter, but ended before it was completed when Lady Jaye (born Jacqueline Breyer) died of stomach cancer in 2007.
By then, experimental filmmaker Marie Losier had gathered eight years of footage on their lives together, after meeting the couple in New York and immediately joining them on a Psychic TV tour of Europe. She had footage of them onstage, at home, on the subway, strolling through Brooklyn. The final documentary collects those moments into a nontraditional, impressionistic whole.
The French-born director recognized a startling and touching story emerging very early. “There was an incredible bond between Gen and Jaye -- a very unusual way of never letting go of each other’s hands, in the same hair and clothing, finishing each other’s sentences,” said Losier. “This was something that touched me even more.”
They identified as artists first, but by day Breyer was a registered nurse who worked with seriously ill newborns, and on some nights she also worked as a dominatrix for a select clientele. It was work that P-Orridge describes as “sensing and caring for people’s psychology and emotions.” She was a runaway at 14 when she landed in Manhattan in the 1980s and gravitated toward punk rock and the underground performance art scenes.
By then, the British-born P-Orridge was already a controversial musician and artist, whose Throbbing Gristle was once attacked as “a destroyer of civilization” by a member of Parliament. He was also a pioneer in modern body modification. When he had his genitals pierced in the early ’80s, it was front page news in the stunned British music press.
They were married 14 years, and P-Orridge refers to his wife’s passing as “when Lady Jaye dropped her body.” Her diagnosis and death came suddenly, and Losier had yet to record a formal interview with Breyer. But P-Orridge still draws on a library of sounds and effects she left behind, continuing their collaboration in Psychic TV and elsewhere.
When a briefly reunited Throbbing Gristle appeared at the Coachella festival in 2009, P-Orridge sang the group’s emotional “Almost a Kiss,” adjusting the lyrics in tribute to his late wife and kissing the tattoo of her face on his forearm. He says that some of their elaborate plans did come true.
“She used to say, ‘All I want to be remembered for is being part of a great love affair,’” said P-Orridge. “It made me really happy to see the film and realize Lady Jaye’s one true wish in life had been made possible.”
-- Steve Appleford
Posted by jacurutu3 at 6:27 PM No comments: