DVD release of Marie Losier's BALLAD OF GENESIS AND LADY JAYE on Oct 30, 2012

Email ThisBlogThis!Share to TwitterShare to FacebookShare to Pinterest
Labels: 2012, DVD release of Marie Losier's BALLAD OF GENESIS AND LADY JAYE on Oct 30

To call Genesis Breyer P-Orridge chameleonic would be a misnomer. Rather than changing hues at random and reverting to some originary palette, the artist’s extensive body of work continuously transforms and mutates across unknown territories. Aside from being a founding member of germinal and influential bands Throbbing Gristle, Psychic TV, and Thee Majesty, Genesis’ artistic output from the past four decades consists of video, collage, body modification, sculpture, performance, and experimental writing. Now, for the first time ever, the enigmatic visionary has a solo exhibition in Montreal, thanks to Festival Phénomena—formerly known as Festival Voix d’Amériques. La Centrale Galerie Powerhouse, along with curators Mathieu Beauséjour and Peter Dubé, present The Eyes of Genesis Breyer P-Orridge, a kaleidoscopic look at Genesis’ collage and video work. Nightlife.ca spoke with Dubé about this monumental exhibit.

Nightlife.ca: For anyone not initiated into the world of Genesis Breyer P-Orridge, what can we expect to see from an artist who's so invested in exploring the unexpected and the unknown?
Peter Dubé: Genesis’ work is alchemical in the truest sense; I mean by this, among other things, that it works on its materials and ideas through reduction, combination and transformation. For that reason, people who come to look at the images, collages, and videos will see carefully created zones in which wildly disparate elements of life and culture come together and hybridize: sex and spirituality, media and magick, pop and power. The work goes places that are both visionary and uncomfortable, that inspire and unsettle… And I can’t think of a better reason to come see it.

Genesis was in Montreal in 2003 for a ritual performance at Concordia's VAV. However, this is their first exhibit in Montreal. Has the show been a long time in the making? How did you become involved as co-curator?

The show is the result of one of those happy confluences of opportunity and passion. My partner, Mathieu Beauséjour, who is my co-curator on this project, and I are both big fans of Genesis’ work and have been for years. We’re also both involved with the culture biz and the contemporary art world. So, when we heard that the Phenomena Festival was bringing Genesis and Thee Majesty in to perform, we thought it would be a terrific opportunity to show their artwork at the same time. From the idea to the execution was relatively quick, and everybody we contacted about putting the show together was keen to take part. Also, let me offer a big thank you here to the teams at La Centrale and the Phenomena Fest!

Photo: Marie Losier
Genesis’ artistic and musical career is expansive. Does this exhibit focus on a particular aspect of their catalogue?

From the beginning, we wanted to focus on the visual art, both collage and video. We chose this body of work partly because Genesis’ production with Throbbing Gristle and Psychic TV was the better known area of their creative research, and partly because they were performing at the festival with Thee Majesty, so people would have a chance to experience the music and spoken word stuff first hand. The work in the exhibition covers roughly the last twenty years, and was chosen to be representative, but also because we found specific works especially compelling.

Genesis once said, “Everything for me is research; there’s no finished product, there’s just the research and the curiosity to understand something that I felt.” What kind of challenges did you face incorporating the ephemeral nature inherent to large swaths of their work?

Genesis has often spoken of their work as research, and you’re right – in many ways such a focus can pose issues in putting together a show. In our case, we at least partially sidestepped the difficulties by focusing on work that had a fixed, physical existence and showing those in a traditional exhibition format, which was our idea from the beginning. Our thinking was that looking at these works might operate as an entry point into the artist’s larger practice, might open the doors as it were. After all, if one wants to get on a moving train, one has to do it at one particular spot on the route.

As a fan of Genesis’ oeuvre, particularly their indelible sonic contribution of industrial music, how was it liaising with the artist for this show?
Yes, I am a huge fan of their work and have been since I was a lad, really. I think the most important thing I can say about this experience is that my appreciation and admiration of Genesis is only deeper now that I’ve met them and had a chance to hang out and chat a bit. They are as insightful and serious about their ideas as I suspected, and they are as generous, genuine and easy to talk to as I could have hoped. And they’re so sweet too!

There’s something interesting about this meeting of the more politicized mandate/worldly politics of La Centrale and the alchemical/otherworldly ritual element of Genesis’ work. Is there a way to bridge these two elements? Or perhaps they’re all part of the same parcel?
I think that’s a great question; it opens up so much space for thought. I guess my answer here (given our limitations of space, and that it is such a broad area) is that in some ways I see that division – or binary – as a kind of false one. If you look at the historical record, you’ll find “magick” has often been an oppositional force, a zone of resistance. This holds true from the village witch of premodern times, who operated on the fringes of the “official community” and ensured the continuity of older, frequently less orderly, forms of knowledge to contemporary “chaos” magicians. Magick has traditionally operated in a tense dialectic with hierarchical forms of spiritual practice. It has also tended to be a place in which women, queers and gender-variant people have had prominence. So, in a way it made a lot of sense to us to show this magickal and political work at La Centrale, which has so proud a tradition of feminist thought and practice.

In collaboration with the Festival du nouveau cinéma and Cinéma Excentris, La Centrale is also presenting Marie Losier’s documentary The Ballad of Genesis and Lady Jaye. The film follows Genesis and their late partner, Lady Jaye, as the two undergo plastic surgery procedures in order to look more alike and to become one entity.

Email ThisBlogThis!Share to TwitterShare to FacebookShare to Pinterest
Labels: The Eyes of Genesis Breyer P-Orridge Exhibit

Video director Grant Singer (Sky Ferreira's "Everything Is Embarrassing", DIIV's "How Long Have You Known") has made a short film whose cast and crew brings together a sparkly list of names from many corners of the music industry. IRL, as the film is called, tells the tale of "a girl who struggles to piece together the events of the previous night over 24 incandescent hours in New York City," according to Singer. It was written by Patrik Sandberg.
That girl is played by Sky Ferreira; her castmates include Genesis P-Orridge (of Throbbing Gristle and Psychic TV), Liza Thorn and Matt Koshak of Starred, DIIV's Colby Hewitt, and photographer Sandy Kim. The film also features Damien Echols of the West Memphis 3. Salem's John Holland and Gatekeeper's Aaron David Ross did the score.
Below, watch the trailer, which packs the always-alluring punch of an indie film about beautiful people despairing in a fictional and seedy underbelly of New York. 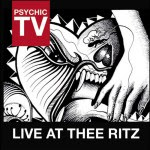 CSR173CD (November 2012)
Psychic TV | Live At Thee Ritz
Recorded on 6th November 1983, this is the complete, mostly unheard document of Psychic TV’s first ever show as a full live band, after their appearance at The Final Academy, with William S. Burroughs in 1982. Originally issued on vinyl only in 1989 (in an edition of 5000 copies), rare tapes have been found to expand to a full double CD set, with updated sleeve notes and never before seen photos. The classic PTV line-up: Genesis P-Orridge, Alex Fergusson, John Gosling, Peter Christopherson, and Geff Rushton.

This item does not ship until 12th November. Pre-order now!
Posted by jacurutu3 at 9:01 AM No comments: