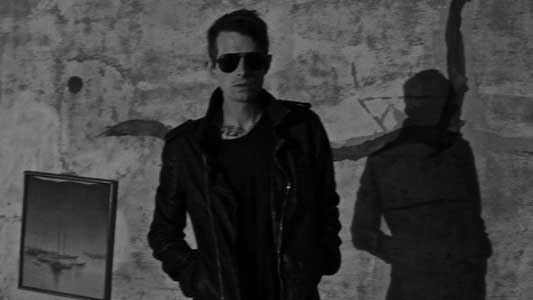 In the world of Vol. 1 Brooklyn, Wes Eisold very much falls into the archetypal “this person needs no introduction” category. As a musician, he’s made visceral, charged hardcore as part of Give Up the Ghost and Some Girls; via his current group Cold Cave, he’s retained that intensity but opted for a more synth-drenched, blissed-out approach. Following 2011′s triumphant Cherish the Light Years, Cold Cave has released a series of 7″s. It was with this series in mind, along with the news of abundant activity from Eisold’s Heartworm Press (including a book from Genesis P-Orridge and a new edition of Boyd Rice’s NO), that prompted this interview, conducted via email.

You’ve been in the midst of releasing a number of seven inches. What do you find most compelling about the EP format?
For years I stopped buying 7″‘s but I’m back with them. I like the idea of a single and a B-Side. Especially now at this point for where Cold Cave is at. I’m making these songs and want to put them out as they come and not worry if they fit on an album together. I want an album to be thematic and cohesive and I’m not ready yet for that.
What inspired you to record this series of seven inches?
I did a tour last year with a full band. I wanted to hear the Cherish the Light Yearssongs played that way. A lot of that record was made with real instruments as opposed to all of my other records being mainly electronic. After the tour I came home and was trying to decide what to do and where I wanted Cold Cave to go. I started recording and writing like I did years ago. Alone, in an apartment, at a desk. And I liked what I made and I liked that they were from me to the record without influence or other hand’s in it. In 2007/2008 I felt like I was releasing records pretty regularly. I want to do that again so I am.
There’s a reference to Harvard Square in “Oceans With No End.” Do you find that geography plays a role in your songwriting?
Growing up moving every year or two made me think of the past in terms of location often. All of these different places I’ve lived in seem like different little lives. That song’s working title was “Song for Disenchanted Boston Youth” before I finished the lyrics. The lyrics and the feel of the song take me back to how I felt when I was living in Boston. It was a magical time there in the early 2000′s. I felt like I was going to live forever or die at any time and either outcome was cool.
Heartworm Press has also been busy as of late — has there been one particular impetus behind this amount of activity?
It slowed while I was touring heavily over the last few years and Max Morton took over the day to day. I wasn’t living in a steady place where I could operate out of. I have that now so that’s mostly why.
How did you come to work with Genesis P-Orridge on a book?
I met Genesis through Ryan Martin who is one half of Dais Records. They are very close and Ryan knew a lot about the archive there. Eventually I started scanning so many poems that Genesis had thankfully held onto over the years.
How has your own writing been going?
I’m working on a new poetry collection for early 2014. You have to write all the time. And when you’re not you need to be thinking about it.
Photo: Amy Lee
Follow Vol. 1 Brooklyn on Twitter, Facebook, Google +, our Tumblr, and sign up for our mailing list.
Tagged with: wes eisold
Posted by jacurutu3 at 11:54 AM No comments:

Roadburn Festival 2013 will run for four days from Thursday, April 18th to Sunday, April 21st, 2013 (the traditionalAfterburner event) at the 013 venue in Tilburg, Holland.
http://www.roadburn.com

by GENESIS P-ORRIDGE
retweet
[Editor’s note: Are you having trouble understanding artists through their art? Understand them through their STUFF instead. Art history never elucidates the importance of the artist's dual role as creator and person who owns STUFF, even though STUFF is important: it's what accumulates when you make decisions. Owning someone's STUFF helps you channel their spirit and personal brand. This is our tribute to STUFF. From books, to art works, to phony iPads

, these lists will contain both the common and the strange.  This week we bring you an amazing list by Genesis P-Orridge.]

A two and a half bronze statue of Lord Shiva which was the very first really expensive gift Lady Jaye bought me by using “lay away” for more than a year to be able to pay the thousands it cost her, showing me once again how deep and long term her unconditional love for me was and is. S/he added cascades of malas,Hindu and Tibetan “rosaries”, ritual talismans from the Naga and Agori sects making this the spiritual center of our focussed state of love.

Our DREAMACHINE was made specially for my SELF and Lady Jaye by “Johnny Smoke” to replace one seized and “probably destroyed for it allegedly being satanic” according to the Scotland Yard detectives who made off with our original. Revealed to Brion Gysin during a reverie on a bus in France and manifested as a working device by Ian Sommerville in the 1950′s Dreamachines can generate kaleidoscopic visions and hallucinations as they spin creating a flicker on the eyelids making this the only work of art you must look at with your eyes closed.

Handcarved Penis and Labia with Fur

A hand carved 8 inch wooden vagina with clitoris and enlarged labial hole coupled with a beautifully carved, erect, circumcised 9 inch penis with large scrotum sparse monkey or Yak fur as faux pubic hair and are worn during initiation at puberty by a blessed shamanic few young men. Those so chosen wearing the female totem across their buttocks tied with cord are penetrated those anally through the symbolic wooden vagina.

Walking through the Buddhist talisman market in Bangkok with Lady Jaye in 2002 we took a small alley to avoid the crowds.On a corner was a shriveled agelessly ancient old man sitting on a blanket surrounded by junk a thrift store would reject. But some intuition forced me to stop. We immediately were drawn to what now is one of our most reveredobjects.It’s a thick brass penis/automatic gun. The barrel is covered in spherical lumps that represent small pearls inserted under the thin skin of the penile shaft, the “head” is smooth, and has a urethral hole. The handle/grip is a mock up of standard grips but is hollow and could possibly hold a real clip of ammunition. There’s no trigger. There are very faint engravings of the same Thai script gangsters, among other Thai groups, receive from priests at certain Monasteries. It seems a very serious magical object, possibly a “wand” to point at, fire a curse at..an enemy.

A copy of my “THEE PSYCHICK BIBLE: Thee Apocryphal Scriptures

“ by Genesis BREYER P-ORRIDGE published by www.FeralHouse.com and available via Amazon

is a matter of pride. From 1981 to 2001 we initiated a global network of like-minded Individuals experimenting together, alone and even in “COUM-unities”. The “P Bible” is 540 pages of documentation of our triumphs, failures, chaos, inspired gatherings, shamanism and demystified systems of rituals to maximize each Individual Being’s potential in all media and cultural options. This book often seems to work like a “YI KING”, or other oracular methodologies, the phenomenon if the reader just opens it at a “random” page.

My 300 plus years old Tibetan Thighbone Trumpet that we received  from Dr Alain Presencer, an expert on Tibetan ritual music and instruments in the early 1980′s. Tradition declares they should be made ONLY from the thighbone of either a Virgin young woman Or of a murderer! He assured me mine was from a Virgin girl and was once owned by Drukpa Kunley a wandering Tibetan monk known for his devotion to the :Crazy Path”. It certainly has remarkable powers healing Lady Jaye in her “death bed”  when a Mongolian female shamaness sang through it vibrating all Jaye’s bones, and mine and somehow dis-integrating the source of her illness, diagnosed as hopelessly terminal by traditional medicine, so s/he was up and about the following day. (read:”The Divine Madman” translated by Keith Dowman, published by Pilgrims Publishing, Varanasi, Kathmandu, Nepal.)

One of my favorite books of all time is “The Modern Utopian: Alternative Communities of the ’60s and ’70s

” by RichardvFrancis ( published by www.processmediainc.com.) It is a collection of articles written in the 196o’s and 1970′s about therise, and almost inevitably, the falls of communes across the U.S.A. detailing the unforeseen issuesover money, cooking, cleaning and other chores that so consistently led to disintegration. Those that survived, and some still do today, tended to have a charismatic guru figure and strong belief system at their core.

All my photographs of my beloved “Other Half” Lady Jaye, combined with her love letters and diaries have to be an equal most special item. We have been blessed with working and befriending so many luminaries and remarkable beings; Dr Timothy Leary, William S. Burroughs: Brion Gysin; Derek Jarman and many , many others yet Lady Jaye BREYER P-ORRIDGE easily tops that list. A documentary called “The Ballad of Genesis and Lady Jaye

” by Marie Losier is now available from New Yorker Videos, or even, we’ve been told from Netflix.

My full collection of “OZ” Magazines from the 1960′s and 1970′s. We used to “street sell” these to raise money for food and bills. They are the most incredible and by far the most unique collection of psychedelic graphic art of all the “underground” publications. Martin Sharp and Hapshash ( Michael English and Nigel Weymouth) in particular, define for me the pinnacle of wild, delirious artistic madness in both images and freeform lettering that so typified English psychedelia.

My Humble Apartment and Pekingese Puppy

My humble apartment. It is the first apartment we’ve lived in since Lady Jaye “dropped her body” and the first we’ve totally renovated. Only the windows are original. We call it “The Nest” and share it with my library of books, my dear friend Leigha Mason and my new rescue dog “Musty Dagger” who is a Pekingese who snuggles up to me each night reassuring me that we are deeply loved in our Nest of happy dreams.