A call to action.
An invite.
Extended to Those GENuinely interested in developing a new TOPI coum-UNITY to becoum involved in discussions at
http://truetopi.ning.com/
WHO WANTS REAL CHANGE?


Thee motive?
To build...an ongoing nettwork of centres and creation -based communities.

When WE say creation/Creation WE mean "creativity."We just feel Creativity is too simplistic and flimsy in its day to day use..."Creation" re-minds us that the act of CREATION is the most vital, essential source of all else. The book of Genesis begins with acts of CREATION. At the centre of ALL "existence" before T.I.M.E and SPACE is that first action, without which nothing can be perceived. CREATION....

OTTT find this a vitally impoprtant distiction and linguistic foundation. So by stressing the magicakalcore we
re-MIND our SELF that this is Dvine work, Divine activity, devition to Creation is prayer and perception coumbined to manifest the billions of Individual Universes that already co-mingle on earth.

Each humanE Being lives entirely within THEIR lifelong personal Universe. Others come and go within it, but only the Individual is present 24 x 7 in THEIR Universe. and present at every momeant that their senses and
consciousness(s)  EXPERIENCE. 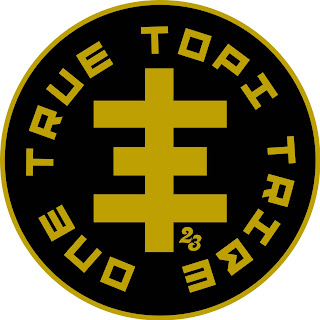 THEE CURRENT SITUATION
Western materialist capitalism. That’s obviously already failed. It’s been running on an empty tank for so long, andthe next step is China of course, which is totalitarian capitalist-- Russia, too. It's where you use violent force and threats and fear to control the economy for profit. But all of them are going to collapse; it’s inevitable. You can’t have infinite growth forever when you’re on a finite piece of planet. We thought to preempt all that, we’d start with the patch, hence, “The One True Topi Tribe.”

THEE OPEN ROAD AHEAD
In any movement-- be it new or regurgitated or reassembled in a new way with a different emphasis,especially in street culture-- there are certain things that are very helpful. One is to have a great logo. Well, we already had that with the Psychick Cross. It was beautifully ubiquitous. Another possibility is cheap, easy outfits. It’s accessible to everyone who’s willing to make the
investment for a patch. That’s why, in the beginning, industrial [style] was old camo and clothing, and it didn’t
matter if it got dirty. Actually, being dirty was part of the function. This time, it’s a leather jacket or a denim
vest. Slice off the sleeves, put a patch on it, and then decorate it how you wish with your own particulars. It
gives you instant recognition and a very easy form of entry into groups, so that you see it and know that these people are probably going to have very similar thoughts to you. That’s why we’re working on that now, in advance of the collapse. A lot of people don’t know, but actually one of the Temple ov Psychick Youth [TOPY] access points was a motorcycle club. called the Illuminati of Bavaria Motorcycle Club. Still got my colors from that. They were based in Portland, Oregon, and there were over 20 of them, all with bikes. It was a real motorbike club, an actual outlaw motorbike club. In the '80s, when it was really thriving (and when TOPY was too), we would tear down the West Coast and catch up with them in Portland. Then we’d
have them as outriders as we went down the Coast. We were in our old school bus-- a ’66 school bus-- with the words “Even Further” written on the front, and it all looked fantastic going down the freeway.
Very post-apocalyptic, very Mad Max.All very functional,mobile, nomadic, flexible. And even though it
might look extreme in the way that we are deliberately inserting a movie into everyday life, the lines are so blurred anyway right now. It’s a good way of giving people strategies to work with. Even if you are using something as a metaphor or just for fun, it can still say to people, “Don’t forget, because you might find that useful in 'the futures'. That might be how you find yourself needing to operate.” For those people who wish to have a fulfilling, creative, and more free-flowing and free-thinking way of life, they need to take it upon themselves to build autonomous units that give that to them. The way to do that is to find enough like-minded people to create this super organism that is the sum-total of everyone involved. Partly why we’ve been using “we” so much, instead of “me", “you”, etc.

THEE NEXT-NEW WAY-ON
Psychic TV: new guitarist, new sound. That doesn’t meant it’s, “Oh shit, it doesn’t sound like us anymore.” Instead it’s, “Oh great! It doesn’t sound like us anymore!” It’s always been very flexible. One of the great things about it is that it keeps changing. On our last tour, we started to get a little bit tired, and one night we were sitting in the dressing room and they were all yelling for an encore. We just had this moment where we turned to Jeff and said, “Have you ever heard ‘Maggot Brain’ by Funkadelic?” “Yeah, of course.” “Ok, you’re the encore for tonight.” And he says, “But there’s a piano part.” So we look at Jess and she says, “Don’t look at me, I’ve never heard of Funkadelic.” So he says, “It’s easy. B flat, A, C, and la
dee da.” She says, “Ok, I can do that.” So they walked onstage in Moscow and played “Maggot Brain” for 20 minutes and totally entranced the audience. So Ed, when we got home, he said, “We should record that.”
We improv most things, actually. “Maggot Brain” really isn’t really the old “Maggot Brain” at all anymore, just a few notes here and there. That truly made me like music again, because in all honesty we’d kind of lost interest in Throbbing Gristle, and we thought we’d stop doing Psychic TV, and that was fine. When it’s not exciting, when it’s not giving anything, and nothing is moving, then don’t do it. Like we were saying before, go where the action is. Then suddenly the action is in PTV3 [current incarnation of Psychic TV], and the music is just really good and fun to play. We're shredding the speakers and doing wild prog rock. So that happened simultaneously with the idea of making a network again, with the biker sort of structure.

It’s all exciting. It’s been a while since we’ve been this excited. I mean, obviously we’ve been grieving for Lady Jaye for the past 3 years. All things considered, we’ve been pretty productive and efficient, despite that. There’s this huge influx of energy and it’s coming from the grassroots; it’s coming from young people coming in. We’re kind of being taught at the moment by new people to reevaluate everything. Not just throw things away because we've already done them, but reassess and rebuild and extend whatever’s working. It’s a really interesting time

We’re buzzing, yeah. It’s a hotspot… And yes, we are going
to get motorbikes.
-Genesis P-Orridge/OTTT 2011
Posted by jacurutu3 at 8:18 PM

Email ThisBlogThis!Share to TwitterShare to FacebookShare to Pinterest
Labels: OTTT